Who you calling a knuckle head? 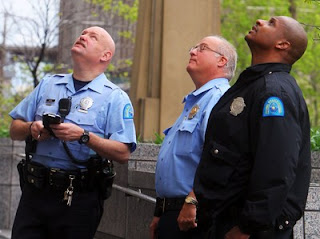 Well, its not escape-proof anymore is it?

ST. LOUIS – A "knuckle-headed corrections officer" is to blame for the escape of two men who apparently climbed down a homemade rope Friday morning to escape from a St. Louis detention center, the mayor's chief of staff said.

The St. Louis Post-Dispatch reported that Vernon Collins, 34, and David White, 33, were discovered missing just before 7 a.m., but police believe they might have been gone for 90 minutes by that time.

White was later caught at a gas station wearing what a station clerk described as a "Bruce Lee wig," the St. Louis Post-Dispatch reported. He was taken into custody about 4 p.m. after police surrounded an older-model white Cadillac at a Phillips 66 station. Collins remained at large Friday afternoon.