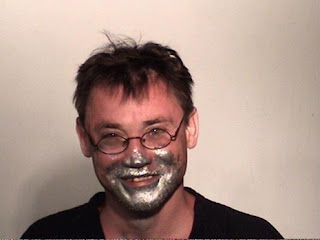 I was going to try out for the part of the "Tin Man" in the local Wizard of Oz theater production.

For the 48th time since 1992, the Indiana man has been arrested for inhaling paint fumes. Gibson’s latest huffing collar came when his wife summoned cops to the couple’s Fort Wayne home shortly after midnight on April 14.

As seen in the above mug shot, officers found an impaired Gibson covered in silver paint. He was booked into the Allen County jail for allegedly inhaling toxic vapors.

The image of Gibson will likely draw comparisons to the classic booking photo of Patrick “Goldface” Tribett, an Ohio man who has earned online infamy for his series of paint-dappled mug shots.
Posted by Sam at 8:40 AM