Apparently even Superman is fed up 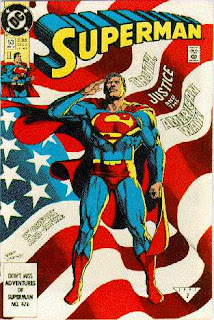 I guess he's about had it too with this Administration.

No longer Truth, Justice, and the American Way.

After recently undertaking a journey to walk -- not fly -- across the United States in the "Grounded" storyline and reconnect with the country and everyday Americans, Superman appears to be taking another step that could have major implications for his national identity: in Action Comics #900...

...Superman announces that he is going to give up his U.S. citizenship. Despite very literally being an alien immigrant, Superman has long been seen as a patriotic symbol of "truth, justice, and the American way," from his embrace of traditional American ideals to the iconic red and blue of his costume. What it means to stand for the "American way" is an increasingly complicated thing, however, both in the real world and in superhero comics, whose storylines have increasingly seemed to mirror current events and deal with moral and political complexities rather than simple black and white morality.

The key scene takes place in "The Incident," a short story in Action Comics #900 written by David S. Goyer with art by Miguel Sepulveda. In it, Superman consults with the President's national security advisor, who is incensed that Superman appeared in Tehran to non-violently support the protesters demonstrating against the Iranian regime, no doubt an analogue for the recent real-life protests in the Middle East. However, since Superman is viewed as an American icon in the DC Universe as well as our own, the Iranian government has construed his actions as the will of the American President, and indeed, an act of war.