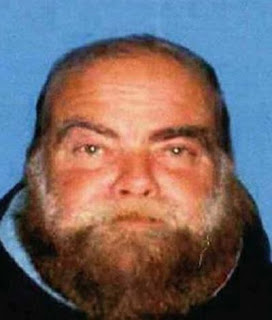 So where does this guy get the money to wind up in Ohio after allegedly setting off the bomb in San ta Monica?

Its doubtful that he's doing this because he's Anti-Semitic.  From his name and the fact that he collects charity from various synagogues, I'd say he's probably Jewish himself.

He is an angry looking fellow in the photo isn't he?

SANTA MONICA, Calif. (AP) — Authorities were working to confirm the identity of a man who was arrested in Ohio and believed to be the person police suspect of setting off an explosion at a Santa Monica synagogue last week.

The man believed to be Ron Hirsch, 60, was arrested in suburban Cleveland Heights late Monday after a concerned citizen who came into contact with him called police, said FBI spokeswoman Laura Eimiller in Los Angeles.

"It's believed to be him but, just as in any arrest scenario, a formal identification must be made," Eimiller said.