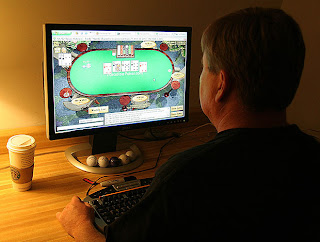 I must confess to having occasionally played (for no money) on some poker sites several years ago.

It was sorta relaxing, of course I had no money in the fight and used free "play" money so I had nothing to lose.

The founders of the three largest online poker sites were indicted on Friday in what could serve as a death blow to a thriving industry.

Eleven executives at PokerStars, Full Tilt Poker, Absolute Poker and a number of their affiliates were charged with bank fraud and money laundering in an indictment unsealed in a Manhattan court. Two of the defendants were arrested on Friday morning in Utah and Nevada. Federal agents are searching for the others.

Prosecutors are seeking to immediately shut down the sites and to eventually send the executives to jail and to recover $3 billion from the companies. By Friday afternoon Full Tilt Poker’s site displayed a message explaining that “this domain name has been seized by the F.B.I. pursuant to an Arrest Warrant.”