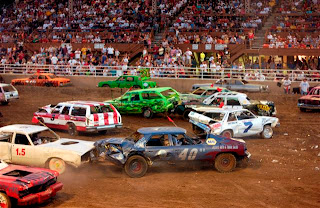 Unfortunately the added bonus seems to be striving to run over the SAPD officers who are trying to help all of us.

Didn't the driver know that Fiesta was over?  Was he still drunk from Fiesta which had ended just 24 hours earlier?

Or was he celebrating that Fiesta was over?

The crash occurred just before 10 p.m. when two police officers were called to the area to remove what turned out to be a doghouse that was blocking traffic, officials said.

The patrol cars were parked in the lane and officers had put out flares when they heard a vehicle approaching fast, police said. The two officers saw the man's pickup coming toward them, so they jumped over the center median. One of the officers sprained her ankle.