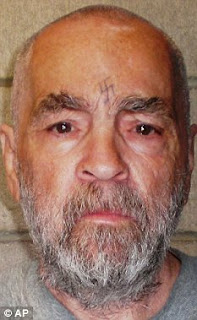 Now both Al Gore and Charles Manson are spewing the same mantra about global warming.


Crazed cult leader Charles Manson has broken a 20-year silence in a prison interview coinciding with the 40th anniversary of his conviction for the gruesome Sharon Tate murders - to speak out about global warming.

The infamous killer, who started championing environmental causes from behind bars, bemoaned the 'bad things' being done to environment in a rambling phone interview from his Californian jail cell.

'Everyone’s God and if we don’t wake up to that there’s going to be no weather because our polar caps are melting because we’re doing bad things to the atmosphere.

'If we don’t change that as rapidly as I’m speaking to you now, if we don’t put the green back on the planet and put the trees back that we’ve butchered, if we don’t go to war against the problem...' he added, trailing off.

Manson, who described himself to his interviewer as a 'bad man who shoots people', brainwashed members of a commune known as The Family into butchering eight people including film director Roman Polanski’s pregnant wife Sharon Tate in July and August 1969.