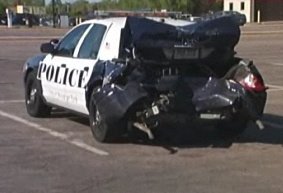 The driver was faced with a good news/bad news situation.

You hit a police car.

Apparently no one was hurt.

Woman strikes deputy's car, arrested on DWI charge
By Will Wright The Herald-Zeitung


NEW BRAUNFELS — A Comal County sheriff’s deputy sitting alone in his car at an Interstate 35 rest stop early Tuesday found out he didn’t have to go far to make his next arrest.

“A drunk driver hit his car,” said CCSO Lt. Mark Reynolds of the incident, which occurred at 3:34 a.m. at I-35’s northbound rest area near the Schwab Road exit. “That’s when he called a judge to get a blood (draw) warrant.”