In LA everyone's a star! 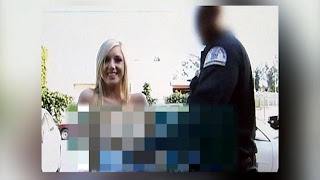 Your taxpayer dollars at work LA.

City officials failed to discipline two traffic officers who appeared in a pornographic film while on the job, NBC4 LA has found.

Documents: Code of Conduct Memo (PDF) | Department Disciplinary Action Penalties (PDF)
The Los Angeles Department of Transportation has opened an investigation into the behavior of two uniformed, on-duty officers who appear in the sexually explicit movie. The investigation was prompted by the NBC4 LA exposé.
"It's absolutely disgusting," said Amir Sedadi, general manager of LADOT, after viewing a copy of the movie shown to him by NBC4 LA. "Immediately, we will conduct a full investigation. This is not acceptable to me.”
The rest of the story:
Posted by Sam at 7:55 AM