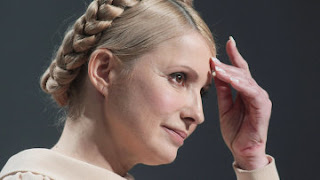 Charges are piling up against Timoshenko, former prime-minister of Ukraine and now the object of ire for Ukraine’s eastwards looking government, and the reverberations have been felt even by Vladimir Putin.

After wrestling with Russia in a tug-o-gas war, while looking towards Europe for her vision of Ukraine’s future, Timoshenko is finding that her political chickens are coming home to roost as the prosecutor sharpens his axe.

She was ousted from power in 2010 after losing a presidential election to Viktor Yanukovich, a bitter foe with a less hostile attitude to Russia, and claims the charges mounting up against her are part of a political mud-slinging campaign.
Posted by Sam at 7:51 AM