Maybe it was an inflation hedge? 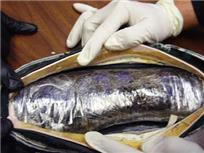 That my friends is a whole bunch of heroin.

Two San Antonio men have been arrested after police found more than two pounds of heroin during a raid at a South Side home this week.

Filiberto Villalba and Roberto Gomez appeared in court Wednesday on a criminal complaint charging them with possession with intent to distribute more than 100 grams of heroin. U.S. Magistrate Judge Pamela Mathy ordered them held without bond pending a bail hearing today.

Investigators watched a home in the 500 block of Collingsworth Avenue on Tuesday as Villalba arrived there, followed by Gomez.