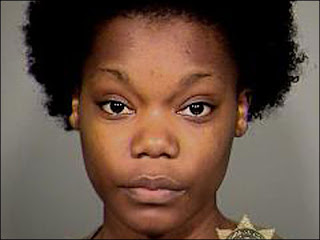 The face of stupid.

PORTLAND, Ore. (AP) — A woman accused of attempting to circumcise her baby at home using a box cutter and a pair of pliers faces assault and criminal mistreatment charges.

Keemonta Peterson, 29, of Portland, told police she decided to circumcise her baby at home after reading the Bible. She said she watched some YouTube videos about circumcisions before making the attempt in October, according to The Oregonian.

After the 3-month-old boy suffered two hours of uncontrolled bleeding, she called 911 and the baby was rushed to a hospital where he was initially listed in critical condition. The boy appeared to have recovered with no permanent injury.