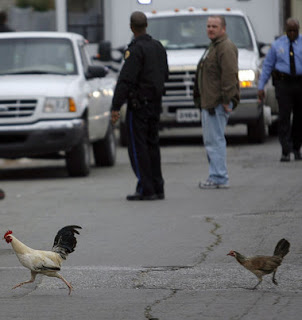 Feral chickens have proliferated in New Orleans since Hurricane Katrina
By Katy Reckdahl, The Times-Picayune

Since Hurricane Katrina, Ruby Melton's 9th Ward enclave has welcomed a new species of neighbor: clucking, crowing, prancing chickens that dart across streets and nest in the trees.

We don't have stray dogs any more," said Melton, 68. "But everyone I talk to has stray chickens."

Most people figure that the wild birds descended from domesticated fowl that escaped backyard coops after the storm. Since then, the population has boomed, with the local SPCA chapter now dispatching officers weekly to catch feral chickens, spokeswoman Katherine LeBlanc said.