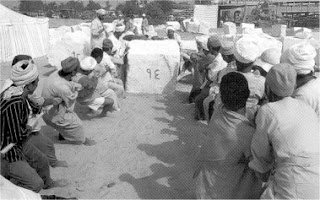 As an old former geologist Man o' Law has been greatly interested in watching the work of the stone masons as they carefully remove the quarried limestone blocks from the "newer" portions of the Old Courthouse.

Newer is strictly a relative term as the portion being demolished is from 1931.

Watching the men work reminds me, in a small part only, of what it must've looked like when the Pyramids were built.

In this day of machinery and power tools its amazing to see how much work can be done and how quickly it can be done by a group of men only wielding hammers and chisels.

NEW BRAUNFELS — Amid the din of demolition activity, Comal County Judge Sherman Krause stood in the middle of the large room that will become the Commissioners’ Court meeting room and used his shoe to kick debris away from a seam in the floor.