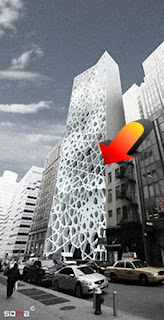 Is the proposed Ground Zero Mosque covered in Stars of David?

Look where the arrow points in the photo.

The sketches showed a 16-storey building wrapped in a honeycomb of abstract shapes.

The building was compared by some to the Fortress of Solitude, the crystalline headquarters of Superman depicted in comic books.

Others suggested that some of the shapes resembled the Jewish symbol of the Star of David. The company behind the development pointed out that the hexagram is also used in Islam, as the Seal of Solomon, as well as in Christianity and other religions.