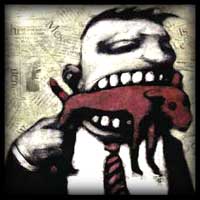 I think this guy needs to also get a psych evaluation.


It's often said if a dog bites a man it's not news, but if a man bites a dog, you've got a story. Well, here is that story.
West Haven, Conn., Officer Scott Bloom was on patrol with his K-9, Onyx, near the Rite Aid on Elm Street early Thursday morning, when he noticed Roderick Lewis walking toward him. Lewis yelled out, "I need a bag of dust," referring to angel dust, or PCP, according to police.


Lewis, 23, walked toward the officer and reached into his waistband, police said, and the officer grabbed Lewis's arms and told him to stop. That's when Lewis punched officer Bloom in the face, according to police.

Onyx, the police dog, jumped from Bloom's cruiser and attacked the suspect, latching onto his leg, according to police. But then Lewis did his own chomping, biting into the dog's side, police said. Lewis didn't let go until the officer was able to pull him off the dog, police said.

Lewis was charged with assault on a police officer, disorderly conduct and cruelty to animals.

Officer Bloom and Onyx were treated for their injuries.
Posted by Sam at 7:06 AM