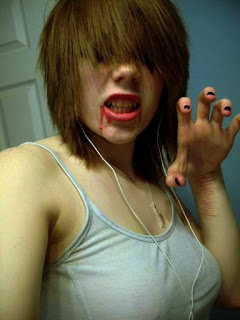 A teenage girl ordered the murder of her mother following a bitter row about bad behaviour.

Tatyana Cherkassova, 15, is believed to have persuaded her boyfriend to kill mother Lilya, 35, after the two quarreled about Tatyana’s long disappearances from home.

And investigators think a threat to send the girl to a boarding school was the final straw which led to the deadly plot, Interfax reported.

Stabbed in the back
Neighbours were shocked when they saw Lilya fall to the ground screaming as she walked towards her work on Oct. 5, Komsomolskaya Pravda reported.

She was jumped on by two young men as she made her way to the Filatov children’s hospital where she worked as a nurse, and they stabbed her in the back and left her to die on Koptevo Ul. In northern Moscow.

And then came the twist – they were acting on the instructions of Tatyana, who planned to get rid of her mother, send her disabled grandmother to a nursing home and live together with her boyfriend in the family apartment.

The second youth was lured into the scheme on the promise of 10,000 roubles which they gang would steal from the dead woman.

Disbelief
At first cops did not believe the pair, thinking they were simply trying to cover up their crimes.

But the story was convincing. “As it turned out this 15-year-old girl really has organised the murder of her mother,” a prosecutor’s statement read.

“We understand the motive was because she did not want to be put in a boarding school because of her bad behaviour.”

And the family’s neighbours also struggled to understand what had happened.

“Tanya couldn’t have done this,” Anna Kuznetsova told KP. “She’s a normal girl, goes to the same school as my son. She has many friends – they often come round here.”

Unrepentant
Tatyana was interviewed by investigators on Thursday and has insisted she had nothing to do with the crime.
But Lifenews added that the girl remained indifferent and did not realise the full horror of what had happened.
Posted by Sam at 7:00 AM