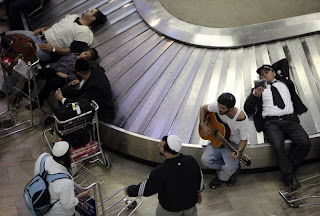 Chalk this one up to "It seemed like a good idea at the time" syndrome.

A 40-year-old Alpharetta man who hopped on a moving luggage carousel at Miami International Airport and rode it into a secure area told the AJC on Friday that "it was just a dumb, boneheaded play."

Bromelow caused a stir in the baggage claim area of Concourse J when he got on the carousel about 1:30 p.m. Thursday.

In an interview with the AJC, Bromelow said it was a stupid prank he sincerely regrets.