Yellow means get ready to stop, not gun it! 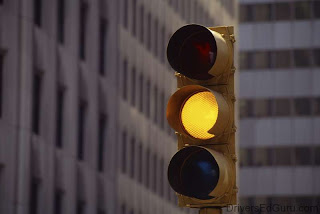 Why am I not surprised?

Call this a hidden tax.  It is a means to raise funds and the timer is apparently set too short.

Baytown, Texas has been caught using an illegally short yellow time at the latest city intersection to be monitored by a red light camera. Tickets have been issued since January 30 at the intersection of Cedar Bayou Lynchburg Road at Garth Road where the yellow time is set to 4.0 seconds, the bare minimum acceptable amount for an intersection posted at 40 MPH according to Texas Department of Transportation guidelines. The Baytown Red Light Camera Coalition (BRLCC) uncovered the fact that the intersection approach is in fact posted with a 45 MPH sign, meaning the bare minimum legal yellow for the location is 4.3 seconds, not 4.0 seconds.

"They didn't even bother to check the speed limit before they went ahead and put this camera up -- or did they?" BRLCC leader Byron Schirmbeck said. "Camera companies are notorious for taking advantage of poor engineering situations like this."

Studies show that shorter yellow times can increase the number of citations generated. According to the Texas Transportation Institute, when the yellow light timing is one second shorter than the bare minimum recommended amount, violations increase by 110 percent (view study). While 0.3 seconds seems like an insignificant amount of time, the vast majority of red light "violations" happen when drivers misjudge the end of the yellow light by less than 0.25 seconds -- literally the blink of an eye (view Texas Transportation Institute chart). Confidential documents uncovered in a San Diego court trial prove that the city and its private vendor, now Affiliated Computer Services (ACS), colluded to install red light cameras only at intersections with short yellow times (view documents), thereby maximizing profits.

Baytown uses a different company, American Traffic Solutions (ATS), which operates all aspects of the photo ticketing system. In less than two weeks, Baytown residents will have the opportunity to cast an early ballot to ban red light cameras from the city. When the votes are tallied on November 2, Schirmbeck believes the failed attempts of ATS to block the vote have backfired and the vote against the cameras will be strong.