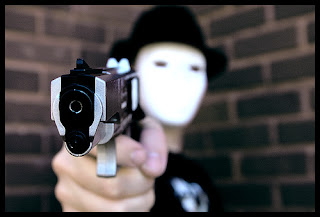 Sad, but just another day in Old Babylonia.

Gunfights broke out as security forces responded, killing the owners of all three jewelry stores, two gunmen and two policemen.

Two police officials gave the toll in the attacks, which was confirmed by a worker at Yarmouk hospital. All spoke on condition of anonymity because they were not authorized to speak to media.

THIS IS A BREAKING NEWS UPDATE. Check back soon for further information. AP's earlier story is below.

Police blamed bombs that were surreptitiously stuck onto cars for both explosions.

In the first, a hospital doctor and his driver were injured in the capital's downtown business district of Karradah around 8:45 a.m. local time. A bystander also was hurt in the blast.

Fifteen minutes later, a bomb hidden on a Ministry of Industry car in south Baghdad killed its driver and injured two bystanders.

Two police officials gave the toll in the attacks, and the deaths were confirmed by hospital workers.

All spoke on condition of anonymity because they are not authorized to brief the media.
Posted by Sam at 7:55 AM