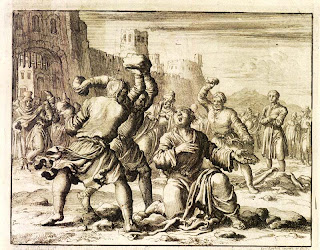 I hope the authorities catch these folks.

Road rage: man stoned to death
The Times of India


NEW DELHI: An unexpectedly ugly road rage incident in the capital ended in the horrific and tragic death of the sole breadwinner of a family of nine. A 42-year-old driver of a chartered bus was stoned to death by unidentified men in a red Qualis car. The car had reportedly been trying to overtake the bus for a while but couldn't manage it despite chasing close behind for more than a kilometre. The incident was reported from east Delhi late on Friday night. A case of culpable homicide not amounting to murder was registered in Seemapuri police station against the unidentified assailants.

Sheikh Kalu, who operated a private bus on the Old Seemapuri-New Seemapuri stretch was reportedly driving back to New Seemapuri when the Qualis tried to overtake near the Ghaziabad border.

He had reportedly just parked the bus a block away from his house near Idgah road, New Seemapuri at about 2 am when the occupants of the Qualis drove up and started to hurl insults at him. The argument took a nasty turn.

The conductor of the bus, Mohammad Azhad, claimed to have been asleep inside the bus when the entire episode took place. In his statement to the police, Azhad claimed that he had woken to Kalu's cries for help and was only able to see four men running towards the red Qualis and zooming off.

Residents claim that the incidents of crime were common in the area. "People are constantly aware of the criminal elements in the area. It is unfortunate that a god-fearing man like Kalu, who was feeding his family by honest and hard-working means fell victim to tyrants on the road. Now the family has nowhere to go," claimed Seemapuri RWA president Sheikh Nisar to Times City.

The driver's death has left his family of nine without any support or source of income. The traumatised family was unable to comment on the tragic blow that has left them rudderless for the present. "Kalu had called me from his cellphone when he reached the parking lot to say that he would be home soon. Now, all is lost," said a distraught Salma, Kalu's wife. Kalu had been driving the bus for Umesh Tours and Travels for several years now.

Salma lives with her mother-in-law Rubia and her seven children. Her youngest child, a girl aged two-and-a-half years, is barely able to comprehend the tragedy that has struck their family. Salma's eldest child, a boy of 16, is confounded at the sudden responsibility on his young shoulders. "I don't know what is in store for us," he said.
Posted by Sam at 7:01 AM