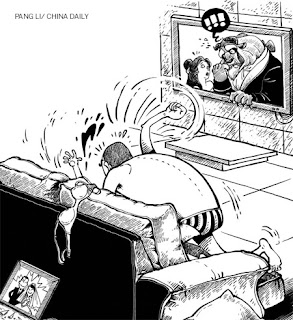 Its a problem everywhere.

The problem of domestic violence
By Cesar Chellala - China Daily

Gender violence may be under-recognized and under-reported, but it is one of the worst epidemics in China today. It is manifested essentially in violence against women, which occurs across China and affects families of all ethnic backgrounds and social spheres. But its impact is not restricted to families. It extends to society as a whole.

According to a survey, one-third of China's households have to cope with domestic violence, both physical and psychological. A china law institute survey in Gansu, Hunan and Zhejiang provinces found that one-third of the responding families had witnessed family violence, and that 85 percent of the victims were women. The surprising thing is that only 5 percent of the people surveyed said their marriage was unhappy, because not only men, but also many women consider violence a normal part of family life.