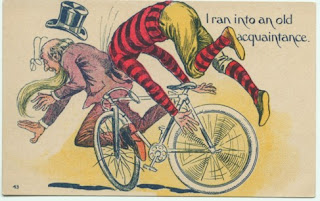 I wonder about the parents who let the kids race their bicycle down the sidewalk where other folks were walking.  What were they thinking?

Wasn't it foreseeable that this could /would occur?

Besides the parents have money, not the kids.


Citing cases dating back as far as 1928, a judge has ruled that a young girl accused of running down an elderly woman while racing a bicycle with training wheels on a Manhattan sidewalk two years ago can be sued for negligence.

The ruling by the judge, Justice Paul Wooten of State Supreme Court in Manhattan, did not find that the girl was liable, but merely permitted a lawsuit brought against her, another boy and their parents to move forward.

The suit that Justice Wooten allowed to proceed claims that in April 2009, Juliet Breitman and Jacob Kohn, who were both 4, were racing their bicycles, under the supervision of their mothers, Dana Breitman and Rachel Kohn, on the sidewalk of a building on East 52nd Street. At some point in the race, they struck an 87-year-old woman named Claire Menagh, who was walking in front of the building and, according to the complaint, was “seriously and severely injured,” suffering a hip fracture that required surgery. She died three months later of unrelated causes.
Posted by Sam at 7:35 AM