No angel got there to stop him 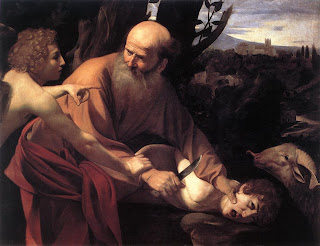 A man charged with the stabbing murder of his 12-year-old son was refused bail today, with a court told that mental health issues were raised during his interview with police.

The 30-year-old man, who cannot be named for legal reasons, faced Parramatta Local Court via videolink, accused of stabbing his son while the boy slept at their Liverpool unit yesterday afternoon.

He later repeatedly stabbed a 26-year-old man in the courtyard of the unit block and attacked another man, 49, who came to his aid, police allege.

According to police documents, the man was armed with a knife when officers arrived at the scene. Interviewed after his arrest, he told police he suffered from paranoid schizophrenia.

Police found the body of the 12-year-old boy inside the unit. The two injured men were taken to Liverpool Hospital with stab wounds. They remain in a serious but stable condition.

The man was charged with murder, wounding with intent to murder and  malicious wounding.

He did not seek bail and was remanded in custody to face court again next month.
Police and emergency services went to a block of flats in Terminus Street, Liverpool, about 4.45pm yesterday after receiving reports of a stabbing.