His vision was blurry 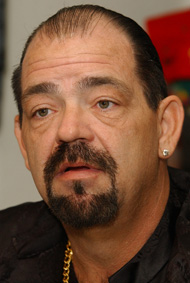 Texas is a no-fault divorce state.  So she gets at least half of  the community property, big deal, you ain't playing pick up the soap with Bubba.

A local businessman known for wearing flamboyant outfits on his optical and tattoo shop television commercials was charged Saturday with hiring someone to arrange to kill his wife.

Mike Yuchnitz, 57, was arrested by San Antonio police at his home and faces a first-degree felony charge of solicitation of capital murder.

He is accused of providing a $5,000 down payment to a man who was to find an assassin, homicide Sgt. Butch Matjeka said.