When the Death Penalty is a good idea 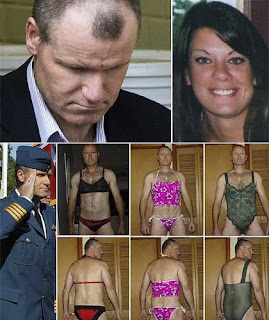 This is simply horrible.

What a monster.  It is cases like this that i believe the Death Penalty was made for.

Why should society show someone like this any mercy when he obviously showed none to his victims?


A Canadian colonel who admitted to 86 lurid sex crimes videotaped the brutal rape and murder of a corporal under his command, a court heard on Tuesday.

Secret life
Colonel Russell Williams, 47, a married pilot who once flew the jet used to ferry Canada's prime minister as well as the British royal family on a visit, photographed and videotaped his repeated sexual assault over 4½ hours of Corporal Marie-France Comeau, the Crown said.

Bruised, bloodied and limp, Corporal Comeau used her last breath to beg for her life, according to an audio tape played in court: "Have a heart. I've been good all my life. I don't want to die."

"Shut up," Williams responded before he taped her nostrils and her mouth closed and watched her suffocate.

Williams sat quietly in the courtroom for the second day of his proceedings but several observers fled in tears as the gruesome evidence was presented.

Police arrested Williams in February for the disappearance and death of 27-year-old Jessica Lloyd, last heard from the previous month. He was caught when his vehicle's tyre treads were matched at a police roadside checkpoint to tracks at the crime scene.

Williams was later charged with the November 2009 murder of Corporal Comeau, who was under his command at the Trenton military base.

He was also charged with two home invasions, in which women were confined and sexually assaulted, and 82 counts of break-and-enter and attempted break-and-enter in Ottawa, Belleville and Tweed.

A stash of women's undergarments taken by police from Williams's Ottawa residence was linked to the burglaries near his home and job.

Williams had met Corporal Comeau only once before her death. She was working as a flight attendant on a military flight. But as her boss, he knew she lived alone and her schedule.

Days before he killed her, he broke into her home and snapped 18 photographs of himself in her underwear and standing next to her pressed air force uniform.

On the night of November 23, 2009, he left his office at the Trenton military base, parked his car outside her home, and listened in the dark to her telephone conversation using a sensitive sound-detecting device.

Williams then broke in through a basement window and attacked her. They struggled. He beat her nearly unconscious with a flashlight, tied her up and covered all of the windows in the house.

Afterwards, Williams washed her bed sheets and drove directly to Ottawa for a meeting with military brass.

He would later send a signed letter of condolence on behalf of the Canadian Forces to Corporal Comeau's father - a 45-year veteran of the military.

Williams commanded Canada's busiest air force base, the 437 Squadron in Trenton, east of Toronto, for more than a year before his arrest. Previously he was in charge of Canada's secretive Camp Mirage in Dubai.

On Monday, he pleaded guilty to his crimes. An agreed statement of facts read out in the Ontario Superior Court traced the escalation of his offences starting in September 2007.

He faces life in prison, with no possibility of parole for at least 25 years.
Posted by Sam at 7:56 AM