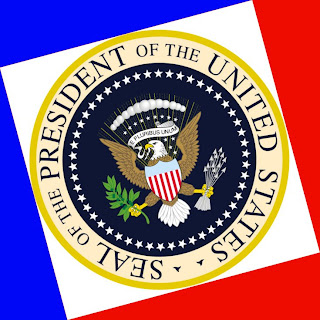 I guess even the Seal of the President of the United States is now too embarrassed to be seen with President Obama?

WASHINGTON (AP) - The presidential seal has fallen off President Barack Obama's podium and clattered to the stage as Obama delivered a speech to a women's conference.

The president was joking with the audience and getting some laughs when he realized what happened. "All of you know who I am," he quipped.

Obama told the audience that somebody in the back was really nervous, referring to the staffer who hung the seal on the front of the lectern so precariously.

The seal fell about halfway through the president's remarks to Fortune magazine's "Most Powerful Women Summit" Tuesday at Carnegie Mellon Auditorium in Washington.
Posted by Sam at 7:38 AM