He deserves the death penalty 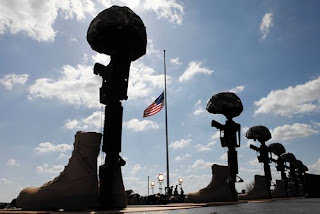 Sorry, but I hope your defense fails and Major Hasan gets the only penalty his act calls for:  Death.

Make him pay for gunning down 13 American soldiers in cold blood, also killing an unborn child in the process when he killed the pregnant woman.  He also wounded 32 others.

BELTON — Forget about acquittal. The attorney for Maj. Nidal Malik Hasan is developing a defense strategy that boils down to one thing — trying to save his client's life.

“I'm telling you, you know you get gut feelings on some things? Thirty-six years or more in the military justice system, I know what I see happening in front of my very eyes,” retired Army Col. John P. Galligan said.

“It's reminiscent of the old cowboy movies, you know where the guy's sitting in the jail waiting for his trial, and you can hear them building the scaffold outside.”