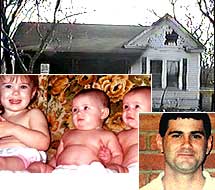 I studied this case a bit as I gave a presentation at the NDAA Arson and Explosives Seminar earlier this week.

The biggest worry I have is that the bigger picture of forensic science is being pre-empted by those who want the death penalty abolished.  At any cost possible.

The job of the Commission is not to determine the guilt or innocence of Cameron Todd Willingham.

AUSTIN — Tempers erupted Friday as members of a state panel scrutinizing investigations in the Cameron Todd Willingham case sharply differed on whether they could express personal opinions on the executed Corsicana man's guilt or innocence.

The heated exchanges were prompted by Texas Forensic Science Commission Chairman John Bradley's recent statement to the media that Willingham was a “guilty monster.”

Willingham, 36, who was executed six years ago for the 1991 arson murder of his three young children, consistently proclaimed his innocence.