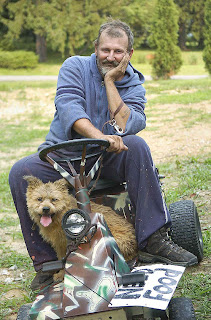 Hydro man lands in jail over poodle rescue
Edwin Fry, 73, of Hydro, faces charges after springing his poodle from the pound with a lawn tractor and bolt cutters. The dog, Buddy Tough, was euthanized while his owner was in jail.


HYDRO — A Hydro man sprung his poodle from the pound using a lawn tractor and bolt cutters, only to land himself behind bars with no one to rescue him. And while he was in jail, his dog was put back in the pound and euthanized.

Instead, on Oct. 13 he drove his lawn mower to the town's kennel, cut through the cage with a large pair of bolt cutters and started home with Buddy Tough on his lap.

Fry's not denying what he did. He warned police to stay away from his dog and meant it, he said.

"I told them 'I don't advise you take my dog unless you want to face my shotgun,'" Fry said.

"They told me they were going to kill him — so there was no choice but to take matters into my own hands."
Hydro police officer Chris Chancellor said ever since two pit bull terriers killed a high school student's show calf three weeks ago, the department has been flooded with calls about unleashed dogs.

"We don't have the manpower to patrol for loose dogs, but we act on every complaint," Chancellor said.
Chancellor said there were numerous complaints about Fry's dog. One woman complained Buddy Tough was coming to her house and causing a ruckus with her dogs.

In a separate incident, a senior fell and injured herself trying to get Buddy Tough off her porch one night. After that, a resident caught the dog and brought him to the police station, he said.
Buddy Tough had already been in the city pound once before. That time, Fry paid the $50 fine and had him released.

The second offense would be a $100 fine, but Fry was told he could retrieve his dog, take the citation and sort out the fine in court, Chancellor said.

"I've been in law enforcement 20 years, and this is the first time I've known of anyone that has busted a dog out of jail," Chancellor said.

Chancellor said he saw Fry leaving the kennel with the dog, but didn't stop him right away.

"He'd threatened to shoot us before, so I approached him with caution," Chancellor said. "I was afraid he might have had a rifle with him."

Once Fry stopped, Chancellor held him at gunpoint.

"He stood up and had the dog in one arm and dropped the 3-foot bolt cutters he had in the other hand," Chancellor said.

Fry was arrested on complaints of second-degree burglary, trespassing and destruction of city property.

Formal charges were not as stringent.

He faces a municipal charge of allowing an animal to run at-large, and a misdemeanor charge in Caddo County District Court of breaking and entering.

Fry spent several days in jail. His bail was set at $1,000 requiring a $100 deposit to a bondsman for release, but no one seemed willing to put up the money, Chancellor said.

Eventually, a Hydro resident came to his rescue.

While Fry was in jail, the dog was euthanized.

"He's flying now with the angels, and I know I'll see him again," Fry said.