Your horoscope for today? Death to the Infidels! 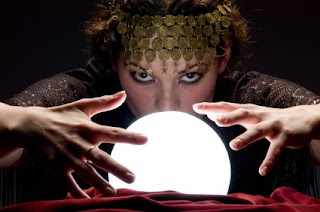 That was me being sarcastic.

Saudi cleric wants death for TV "sorcerers"
Source: Reuters
RIYADH, Sept 14 (Reuters) - A senior Saudi cleric has said purveyors of horoscopes on Arab television should face the death penalty, a paper said on Sunday, days after another cleric argued death for TV owners.
"Sorcerers who appear on satellite channels who are proven to be sorcerers have committed a great crime ... and the Muslim consensus is that the apostate's punishment is death by the sword," Sheikh Saleh al-Fozan told al-Madina daily.
"Those who call in to these shows should not be accorded Muslim rites when they die," the prominent cleric added.
Many of the hundreds of Arab satellite channels have sprung up in recent years specialise in horoscopes and other advice to callers on solving problems that is seen as "sorcery".
In their capacity as judges, clerics of Saudi Arabia's austere form of Islam often sentence "sorcerers" to death.
Fozan, a member of the Higher Council of Clerics, was responding to a controversy ignited by a Council colleague, Sheikh Saleh al-Lohaidan, who said last week that owners of Arab TV shows should be tried and face death over some shows.
Lohaidan, who is the head of Saudi Arabia's Islamic sharia courts, told Saudi radio: "I want to advise the owners of these channels that broadcast programmes with indecency and vulgarity and warn them of the consequences ... They can be put to death through the judicial process."
He was referring to comedy shows and soap operas airing in Ramadan, a month of fasting when Muslims are supposed to focus on God. Critics say Ramadan has become an orgy of food and television consumption once the fast ends at sunset.
Fozan said entertainment channel owners should be "banished" but stopped short of advocating the death penalty for them.
"The position of Muslims and their rulers about these channels is that they should be talked to and if they continue airing depravity and shamelessness they should be banished from this place and others brought in their place."
Turkish soap operas that became hugely popular in Saudi Arabia and other Arab countries this year provoked a storm of anger among Saudi conservatives who fear the spread of secular culture in the key U.S. ally.
The government's official advisor on religious affairs, Grand Mufti Sheikh Abdelaziz Al al-Sheikh, said in July it was not Islamically permissible to watch the Turkish serials.
The owners of Arab entertainment channels, including MBC, ART, Orbit, Rotana and LBC, are mostly Saudi royals and businessmen closely allied to them.
Concerned about the country's international image, some key members of the Saudi royal family have promoted liberal reforms. The clerics fear plans to limit their extensive influence in what is the world's largest oil exporter
Posted by Sam at 6:12 AM