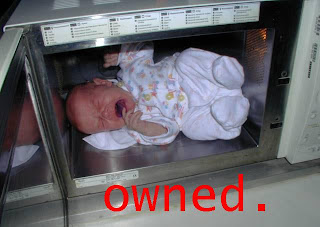 She's lucky to have gotten life.

It's more of a chance than her baby got, isn't it?

Life in prison for Ohio mom in microwave-baby case
(AP) - DAYTON, Ohio A mother who burned her baby daughter to death in a microwave oven was sentenced Monday to life in prison without the chance for parole.
China Arnold, 28, opted not to be in the courtroom during sentencing by Common Pleas Judge Mary Wiseman.
The judge rejected a plea by Arnold's attorneys for a minimum sentence of life in prison with the chance of parole after 25 years.
A jury last week spared Arnold the death penalty when it couldn't reach a consensus.
Arnold was convicted Aug. 29 of aggravated murder in the death of month-old Paris Talley. Prosecutors said Arnold intentionally put her baby in the microwave oven after a fight with her boyfriend.
The couple had argued over whether the boyfriend was the baby's biological father.
Arnold's first trial ended in a mistrial when new witnesses surfaced.
Defense attorney Jon Paul Rion has asked for a third trial, saying a former cellmate who said Arnold confessed has now changed her story.
Posted by Sam at 7:21 PM