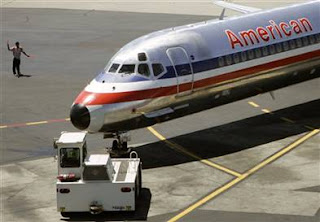 When Man o' Law was a young lawyer working in an insurance defense firm he was told that the worst type of cases involved "screw-ups" concerning burial or loved ones or the handling of the remains of loved ones.

Given that as a caveat, I would suggest that American Airlines settle this matter as quickly as possible.

HORROR: American Airlines Sued Over Missing Body
For 4 Days Miguel Olaya Was Told Everything From 'We Don't Know' To 'It's In Miami' To 'She's In Guatemala'
Lawyer: Wife's Body Badly Decayed Upon Arrival In Ecuador
ReportingPablo Guzman
NEW YORK (CBS) ― It was Miguel Olaya's worst nightmare. Not only had his wife of 26 years died of cancer, but he says American Airlines lost her body when it was time to bury her in their native Ecuador. Olaya is a proud man. But when we was asked what he told his 16-year-old daughter, Laura, about how for several days American Airlines apparently could not tell them what happened to his wife Teresa's body while they waited to bury her in Ecuador, after flying in from New York, well, he struggled to maintain his composure. He didn't want to break down in front of a camera, but clearly he was torn up inside. He managed to get out "Que estamos sufriendo. Translation: "We are suffering."
His wife of 26 years died of cancer, and after a viewing at De Riso funeral home in Brooklyn, the funeral home arranged with American Airlines to fly the body to Ecuador. Between April 1, when her body was supposed to arrive, and April 4, Olaya and his lawyers say American Airlines' story changed from "We don't know" to "It's in Miami" to "She's in Guatemala."
Last Thursday, Olaya filed a lawsuit against American Airlines and De Riso Funeral Home, which attorneys say hired American to transport the body. "This is an airline that has the most sophisticated luggage and baggage system in the world!" attorney Richard Villar said. "How could they not know where the body is?!" Added attorney Christopher Robles: "It appears from what we know about the state of the body when it arrives in Ecuador, that the body was not refrigerated. It was not kept the way a body would need to be kept." Olaya said he saw his wife's poor condition when he opened the casket. In Spanish, he said, "These people played with someone's sentiments." And then, looking for an answer, he said: "Yo no entiendo por que." Translation: "I just don't understand why."
Funeral director Kathleen De Riso said the shipping error was caused by someone at American who punched in the wrong airport code. She said they wrote GUA for Guatemala instead of GYE for Guayaquil. "It was not our error," De Riso said, adding that the body was properly embalmed and "there was no decomposition." She said it was the first time in her 18 years of dealing with American that such a mistake had happened. American spokeswoman Jennifer Pemberton said her company was researching the situation but could not comment because of the pending litigation. Olaya's lawsuit, filed last week in state Supreme Court in Brooklyn, accuses the airline and funeral home of negligence and asks unspecified damages. Olaya's wife died of pelvic cancer at age 57 on March 28.
Posted by Sam at 6:01 AM