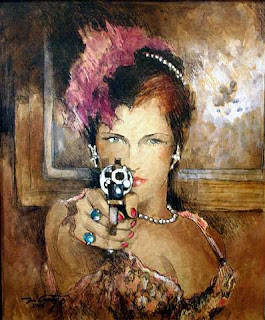 Sounds pretty much like a cold-blooded murder.
I wonder what the appealable issues are?

Wife who killed husband as he slept is guilty of murder
Graeme Zielinski - Express-News
Prosecutor Samantha DiMaio told a Bexar County jury Friday that Eloy Hernandez Jr. learned a deadly lesson in the early morning hours of Jan. 7, 2006, at the hands of Frances Lopez.
“Hell hath no fury like a woman scorned,” DiMaio said, motioning toward Lopez, who sat in the dock. “And there's a reason for that. Because it's true.”
Less than four hours later, the jury of 10 women and two men convicted the 28-year-old Sunday school teacher of shooting her common-law husband Hernandez eight times, twice in the head, as he slept in the couple's bed in the Von Ormy trailer park where they lived. The shooting was punishment for an affair.
Dressed in a black sweater, Lopez sat while the verdict was read as she had for much of the trial, slump-shouldered and expressionless.
Lopez, who had confessed to the crime the day after the shooting but later claimed her admission was coerced, was sentenced to 30 years for the murder of Hernandez, an air-conditioner repairman.
Phil Meyer, who along with Angus McGinty represented Lopez, vowed an appeal of the conviction, citing “various reversible errors.”
McGinty had filed a notice of appeal even before the jury had returned with a sentence. “She got a horribly unfair trial,” McGinty said, citing various rulings by 186th District Judge Maria Teresa Herr on evidence and jury instructions.
Mary Hernandez, the victim's 32-year-old sister, was not as composed as Lopez, and fought back tears as she testified to the effect of the killing.
“When my brother died, I died,” she said. “All of us died.”
Hernandez's parents, who have cared for the couple's 11-year-old son since the murder, cried quietly.
Prosecutors had presented evidence that after the shooting on that Saturday, Lopez spent a carefree day: She left threatening phone messages for the woman with whom Hernandez, 28, was having an affair; got a pedicure and a manicure at a mall; and even went shopping with Hernandez's sibling.
She returned to the house early Sunday morning and then reported the killing, but later confessed to sheriff's investigators.
After days of damaging testimony against her, including evidence of the threatening text messages to the girlfriend, McGinty, appealed to the jury to look at Lopez as a “loved one,” and even put up a handwritten placard to that effect in front of his passive client.
“Help end her nightmare,” he said.
McGinty and Meyer had worked feverishly to diminish the damage done by the Lopez confessions and had claimed that they were the product of seven or eight hours of coercion at the hands of sheriff's investigators.
Posted by Sam at 5:55 AM