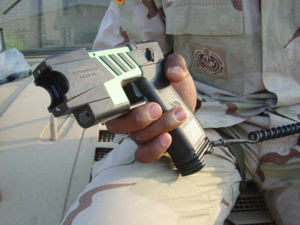 Hell, everything that happens in Bedford-Stuyvesant ourages the folks who live there.

BROOKLYN (CBS) ― Racquel McDonald was standing on Tomkins Avenue in Bedford Stuyvesant, unknowingly recording the last moments of Iam Morales' life on her cell phone. Dozens of people witnessed it, too. Some were taking photos of Morales as he jumped up and down on top of a 10-foot high roll-down gate, swinging a florescent light bulb around and poking officers standing on a nearby fire escape.

An officer on the ground then raised his Taser gun and fired a 50,000-volt shock, immobilizing him. "He wasn't hurting anybody. They could have just grabbed him and bring him down but they Tasered him instead and he fell to his death and it was real wrong," McDonald said. Added a witness named "Kyle:" "The man was isolated for minute … and then he just fell to the floor.

They had about eight cops that could've break the fall. They just moved back." Witnesses said police did nothing to break Morales' fall, and his mother was standing just a few yards away. She was the one who called police, according to family friends, because 35-year-old Morales had a chemical imbalance and she believed he was suffering from a bad reaction to new medication.

"The mother was screaming, 'He's gonna fall!' And they said, 'Step back.' They wouldn't allow the mother to talk to him," witness Charlene Gayle-Gordon said. Added witness Kirk Giddings: "He was there cracking jokes, posing for the cops and everything. The man wasn't a threat to nobody but himself." Morales later died at Kings County Hospital.

Community Activists are now calling on the city to investigate. "We're not holding the whole NYC police department at fault, but we are questioning the actions of the supervisor of the Emergency Service Unit who took and who shot this young man, not one time but twice," Sharonnie Perry said. The community wants to know if the officers here followed proper protocol.

Police said they are still investigating. Thousands of New York City police sergeants began carrying Tasers on their belts this year. The pistol-shaped weapons fire barbs up to 35 feet and deliver 50,000-volt shocks to immobilize people.
Posted by Sam at 6:58 AM