A man who represents himself has a fool for a client 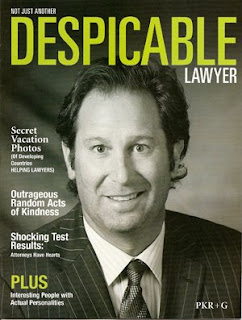 A tough decision for Judge Richardson. Should he let someone who appears to have an obvious problem in grasping reality act as his own attorney? Or not?

I feel for you on this one Bert.

As murder trial starts, defendant sanity is at issue
Graeme Zielinski - Express-News
Last Monday, on the eve of his murder trial in the 379th District Court, Richard Jett tore off his civilian clothes, stuffed them in his holding cell toilet and soiled them, resisting sheriff's deputies to the point a Taser was used to subdue him.
Today, when jury selection and his trial are scheduled to begin, Jett will be representing himself on the outset, again dressed in civilian clothes but wearing a mask to prevent him from spitting on anyone.
After a series of hearings last week, Judge Bert Richardson decided to allow Jett to serve as his own attorney, struggling openly with the question of allowing Jett to “take over” his courtroom. The decision was made after a court-appointed doctor testified that the defendant was competent to stand trial in the 2006 stabbing death of 80-year-old Homer Lee Daniels.
Daniels' son found his father's body lying on his living room floor June 14, 2006. Homer Daniels had been beaten and stabbed in his face, neck and torso.
The prosecutors, defense lawyers and Richardson were temporizing over the existing interpretations of the law, which all seemed to favor Jett's insistence he represent himself, though Richardson indicated he would give him a short leash.
Jett, who was arrested days after Daniels was found in his East Side home and allegedly was implicated by a former girlfriend, has tried to shed, and even has threatened, his court-appointed lawyers, John Kuntz and Albert Gutierrez.
They in turn have sought to prove that Jett could not be counted on to effectively represent himself in such a complicated thing as a murder trial.
Jett testified that he had been treated for schizophrenia and Richardson has made note of the rambling handwritten letters with which he has been bombarded by the defendant, alleging various grievances. Jett said he has HIV and hepatitis and has threatened to spit on guards.
Jett, 50, also testified that he had received his GED while in prison on a 1978 aggravated robbery rap, but had no legal training.
“I've had several trips to the law library,” he told Richardson on Tuesday.
His former psychiatrist did not respond to requests that he testify, leaving Richardson to decide to let the court-appointed doctor review Jett's medical records and give a recommendation as to whether he can represent himself.
As the deliberations progressed throughout the week, Jett's two sisters sat glumly in the courtroom, trying at various points to sway their brother to drop his resistance to what Richardson has called a “bad decision.”
“If you want to go to prison for life, sign those papers,” his sister Nora Jett said Tuesday, pleading as she leaned over the courtroom rail and referring to the documents that would waive his court-appointed lawyers. “You know you can't do it. If you sign those papers, you have signed your life away.”
Posted by Sam at 5:56 AM