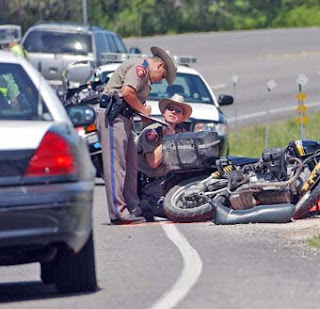 You know, the first thing that went through my mind when I saw this article was the driver who hit him had been drinking.

Sadly, it appears I was correct.

A Nixon man died in a head-on collision in La Vernia on Wednesday.
Law enforcement officials said a car crossed into oncoming traffic and struck a motorcycle.
Henry Paul Dingler Jr., 46, of Nixon was dead at the scene after his 1997 Harley Davidson motorcycle was hit by a 2003 Ford Taurus driven by Francisco Servin, 21, of La Vernia, said Department of Public Safety Trooper Javier Reyes.
Servin was traveling south on Texas 87 when he crossed the center stripe into northbound traffic and struck Dingler, Reyes said.

Servin fled the scene on foot after the crash, but was apprehended and faces pending charges of intoxication manslaughter and failure to stop and render aid, Reyes said.
Posted by Sam at 5:57 AM