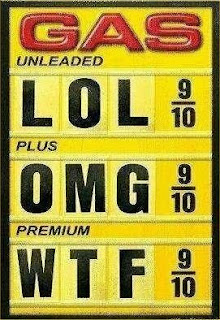 Classic lesson in economics for these hard times.

A Northwest Indiana man facing drug charges allegedly told a police informant he's charging customers an extra $25 because high gas prices have boosted his delivery expenses.
According to Porter County court records, 18-year-old Anthony Salinas of Hammond told a confidential source for the county's drug task force in June that with rising gas prices, he had to add the extra charge to the $215 he allegedly was charging for 7.2 grams of cocaine.
Salinas then raised the price to $250 for what turned out to be 7.5 grams that he delivered in Portage on June 26, records state.
Salinas promised the price would drop to $230 on the next deal, according to records.
Porter County authorities charged Salinas with two counts of dealing cocaine on Sept. 8, but he was no longer in the Porter County Jail as of Wednesday. If convicted, he could face up to 100 years in prison.
Posted by Sam at 7:02 AM