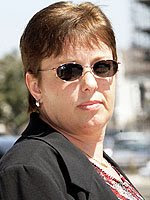 This woman is just simply reprehensible and I think should get the maximum sentence allowed, in prison.

Childish behavior which led to a child's death and she thinks its all a game?

Even Told Her Hairdresser
Feds: MySpace hoaxer let friends know about plot against late teen
From: The Smoking Gun

SEPTEMBER 23--The California woman charged with orchestrating a cruel online hoax that led to the suicide of a teenage girl was once so pleased with her prank that she shared details of the ongoing scheme with her hairdresser and other acquaintances, according to prosecutors. During conversations with several individuals, Lori Drew explained how she and others were "playing a joke on" Megan Meier, a 13-year-girl who was a rival of Drew's daughter.

That joke involved Drew's creation of a MySpace page for a "Josh Evans," a nonexistent boy who took an online liking to Meier, but then abruptly turned on the girl, telling her on October 16, 2006 that the world would be a better place without her.

A distraught Meier committed suicide later that day. In May, Drew was named in a four-count federal indictment charging her with conspiracy and computer fraud in connection with the MySpace scheme. In a court filing yesterday, prosecutors revealed how Drew spoke of the hoax as it was underway, and "denied any untoward purpose and dismissed concerns over her 'prank." An excerpt of the September 22 document can be found below.

While Drew appeared proud of her MySpace gambit while it was active, after Meier's suicide she sought to cover her tracks and mask her involvement in the plot. (a telling point here, no?)

When questioned by FBI agents, Drew said that while she knew of the MySpace hoax, she was not involved in the creation of the phony "Josh Evans" account. Additionally, when agents surreptitiously recorded a conversation between Drew and Meier's mother, Drew "again disclaimed involvement in the scheme." Drew, pictured above, is scheduled for trial next month in U.S. District Court in Los Angeles
Posted by Sam at 6:09 AM