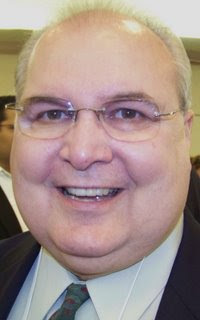 If you live in Bexar County you will be well served by Candidate Dennis McKnight as Sheriff.

He's experienced, he's smart and he has good judgment.

Okay then, get busy and help get him elected.

Candidates for sheriff list their credentials
Guillermo X. Garcia - Express-News
Sounding more like the colleagues they were than the opponents they are now, the two candidates for Bexar County sheriff faced off at a community center meeting Monday.
Democrat Amadeo Ortiz and his Republican counterpart, Dennis McKnight, agreed on most issues facing the next sheriff — including operations at the chronically overcrowded jail.
But they did little to distinguish their differences over how they'd run the department that has a $102 million annual budget.
Both candidates have long records in law enforcement and have managed the jail, one of the sheriff's principal assignments. Both promised to relieve crowding — but were light on specifics — and expand patrol staff and investigators.
They are seeking a four-year term as the county's top law enforcement officer.
The last elected sheriff, Ralph Lopez, was forced to resign last year amid a corruption scandal that neither candidate mentioned in addressing the dozen people who gathered at the Millers Pond Community Center.
Ortiz, a San Antonio native, referred to the Lopez scandal when he said morale among the 100 deputies and 700 jailers is low, while noting that he'd work to improve working conditions, pay and benefits.
McKnight drew a laugh from the sparsely attended Southwest Community Association meeting when he said: “While I wasn't born in Texas, I got here as quickly as I could.”
He also joked about how he became a U.S. Army “foot soldier” after he qualified for helicopter training. “But they changed their mind about making me a chopper pilot after I crashed one.”
McKnight said he'd push for a more proactive approach to law enforcement as well as try to speed up deputy response time to citizens' calls.
Ortiz, 64, who was a 12-year veteran before retiring from the department in 2006, ran the jail and several major divisions, including that of head of courthouse security. He also is a former San Antonio police officer. His brother, Albert Ortiz, is a former police chief.
McKnight, 61, was hired by the sheriff's office in 1999 and headed the jail since January 2006. He was a metropolitan police officer in Washington, D.C., before moving to San Antonio.
McKnight, a Pennsylvania native, is a St. Mary's Law School graduate and former Bexar County Jail director.

He also was an assistant district attorney for Bexar County from 1991 to 1997.
McKnight spent almost eight years working under Lopez, but the former deputy chief left his job running the jail after Roland Tafolla, who said he would not run for sheriff, was appointed to fill the vacancy created by Lopez's departure.
Posted by Sam at 5:58 AM