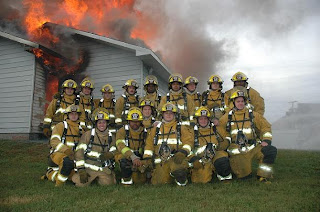 Burn Baby Burn! All in the name of education, of course.

The one used by SAFD is pretty much unavailable and in use.

ACC allocates $3.4 million to school for first responders
Melissa Ludwig - Express-News
Trustees for the Alamo Community Colleges voted Tuesday to spend $3.4 million to start work on a First Responders Academy on the South Side that will serve San Antonio College students and emergency workers in rural outposts across the region.
Located off Interstate 35 near Von Ormy, the academy will include a three-story “burn tower” for firefighters to practice putting out fires, a firing range, a driving course and training facilities for swift water rescue and hazardous materials.
The $3.4 million — scraped up from savings on the $450 million bond program — will only cover the burn tower, pumping station, showers and restrooms, water, sewage and power. The driving course and other facilities are still on the wish list, and officials aren't sure how to pay for them.
But the burn tower is badly needed, and should be open for business sometime this spring, said Robert Zeigler, president of San Antonio College.
SAC lost its lease on a burn tower about a year ago and has been “kind of drifting around since then,” Zeigler said. Though demand is strong, enrollment in SAC's firefighting programs has dropped from about 1,100 to 800 because there is not enough room to train everyone, Zeigler said.
Regional fire departments are also hurting for training facilities. Zeigler said he received about 50 letters of support for the academy from outlying communities, most too small to build their own training facilities. Contracting with those agencies could eventually yield about $320,000 a year for SAC, Zeigler said.
“The city of San Antonio has a facility, but it is barely able to meet their own needs,” Zeigler said. “They really can't do anything for these other areas that need the help.”
The district has already spent about $1 million on the academy: $680,000 for the land and $241,000 to design and plan the facility.
Originally, the academy was part of the $450 million bond program passed by voters in 2005, but got pushed off the list because SAC did not have anywhere to put it. Last year, the district bought a 60-acre parcel of land on the South Side and hired a firm to design the academy. Savings on SAC's $79 million portion of the bond program provided $4 million for infrastructure and buildings.
Nearly 80 percent of the nation's police officers, firefighters and emergency medical workers are trained at community colleges, according to the American Association of Community Colleges.
Posted by Sam at 5:36 AM