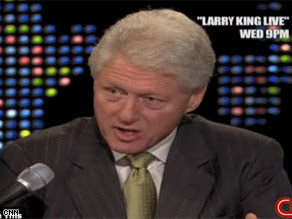 
The first "Black president" is Jewish?

I mean, who knew?

Sammy Davis, Jr. would be so proud!

(CNN) — Bill Clinton praised Sarah Palin Wednesday, saying he found the Alaska governor an “appealing person” and her and her family “gutsy, spirited and real.”

“I think that she and her husband and their kids come across gutsy, spirited and real,” he said in an interview to be broadcast Wednesday night. “I have significant disagreements with her about any number of social and economic issues but I find her an appealing person and I think that it’s best to say that Senator McCain looks like he knew what he was doing. He picked somebody who gave him a lot of energy, a lot of support.”

Clinton told reporters in New York Monday he knows why the Alaska governor is attracting massive crowds on the campaign trail.

"I come from Arkansas, I get why she's hot out there," Clinton told reporters in New York, according to the Associated Press. "Why she's doing well." (Look out Sarah)

"People look at her, and they say, 'All those kids. Something that happens in everybody's family I'm glad she loves her daughter and she's not ashamed of her. Glad that girl's going around with her boyfriend. Glad they're going to get married,'" he said.

Referencing Palin's 5-month old child who has Down Syndrome, Clinton also said Monday that voters will think, "I like that little Down syndrome kid — one of them lives down the street, they're wonderful children.” (WTF? have you lost your fricking mind Bill?)

On Wednesday, the former president fired back at critics who’ve questioned his level of support for Obama, and have called on him to attack John McCain. “Well, if you look at the speech I gave in Denver and the speech Hillary gave, I think it would be hard to question the depth of our feeling and the fact that we gave good reasons for why we were supporting Senator Obama and Senator Biden,” he told King.

“….I think you can argue that [Hillary Clinton] has done more than all other runner-ups have in the Democratic Party in 40 years. We have been quite clear on this. We’re not party-wreckers, and we believe that the country needs to take a different course.

He also said some Democrats were so “enthralled, as all of our strongest supporters are, that they don’t think you’re for them unless you’re dumping on somebody else. I personally think that is not a good strategy to win this election,” he said. “That is, everybody wants Hillary or me or, for that matter, Senator Obama or Senator Biden just to say bad things about Senator McCain or Governor Palin. Those people are already for us.”

Clinton told King he would be hitting the campaign trail for Obama in Florida, to Ohio, to northeast Pennsylvania, and Nevada “at a minimum" in October, “after the Jewish holidays” are over.

"Are you kind of feeling Jewish that you're waiting until after the Jewish holidays?" asked King."No. But I think it would be — if we're trying to win in Florida, it may be that — you know, they think that because of who I am and where my political base has traditionally been, they may want me to go sort of hustle up what Lawton Chiles used to call the 'cracker vote' there.
"But Senator Obama also has a big stake in doing well in the Jewish community in Florida, where Hillary did very well and where I did very well. And I just think respecting the holidays is a good thing to do," he said.
Posted by Sam at 7:05 AM