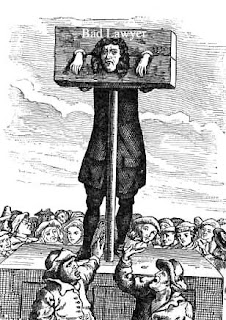 I bet the public defender won't be representing himself.

Attorney Lewis B. Moon, 42, and Oklahoma County public defender David James Bedford, 32, were arrested about 1:40 a.m. at Whataburger, 7820 N MacArthur, after an employee called police and said a driver of a Cadillac Escalade was causing a disturbance and appeared intoxicated, Warr Acres Police Sgt. Alan Davidofsky said.
Witnesses told police the men nearly hit another car in the drive-through lane.
When a police officer arrived, Moon, the driver, was uncooperative and was “taken down,” Davidofsky said. He said Moon also spit in an officer’s face.
Davidofsky said Moon pulled out a badge from the Oklahoma County Sheriff’s office and claimed to be a deputy.
Sheriff’s spokesman Mark Myers said the badge actually is known as a sheriff’s “eagle badge.” The badges are given to people who support the sheriff’s department but they are not official law officer badges. Myers said the badges are not given to people who promise political support or financial contributions but are more of a “keepsake.”
Myers said Sheriff John Whetsel “is extremely disappointed,” to hear about Moon’s arrest.
Moon was said to be belligerent at the Warr Acres Police Department, as well.
“While they were here, Moon was dropping names of judges and threatening to sue everyone. Then, comments were made about tracking down the clerks who called him in,” Davidofsky said.
Moon was taken to the Oklahoma County jail and booked on complaints of having actual physical control of a motor vehicle while intoxicated, impersonating a law officer, resisting arrest and placing bodily fluids on a law officer, Davidofsky said. He said Moon refused to take a breath test to determine whether he was intoxicated.
Myers said Moon was released from the jail Friday morning on $8,000 bail.
Bedford was arrested on a complaint of public intoxication and released from jail early Friday after posting $245 bail, on the Warr Acres municipal complaint, Myers said.
Posted by Sam at 8:27 AM