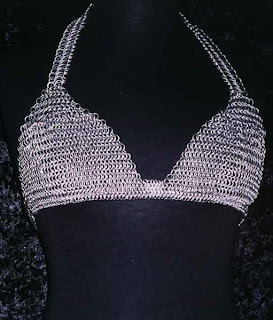 I don't think these designs are going to help much against sub-machine guns and RPG's.

Bulletproof designs add style to growing Mexico security industry
BreitBart.com US/Eastern
Colombian Miguel Caballero's bulletproof clothes are one option for wealthy Mexicans seeking protection from escalating crime, in a private security industry that has mushroomed in recent years.
Mexican families and businesses invest some 18 billion dollars annually in private security measures, according to a recent study by the Center for Economic Studies of the Private Sector, with most suspicious of the notoriously corrupt police.
This year has been particularly bloody so far, with around 3,000 killed in gangland-style attacks including gruesome beheadings -- more than all of last year -- amid a crackdown by President Felipe Calderon on drug gangs and related violence.
Several hundred thousand Mexicans protested against rising insecurity and corruption last month, as the country overtook Colombia's kidnapping rate, with at least 400 reported and many more unreported in the first half of the year, according to rights groups.
Like Caballero, many Colombians are sharing expertise they garnered during the height of that country's drug violence with Mexico's burgeoning security industry.
"The overexposure (to violence) is creating fear in people," said Javier Di Carlo, marketing manager for the Miguel Caballero clothing.
With criminals growing more violent worldwide, the company -- which boasts clients including Colombian President Alvaro Uribe, US actor Steven Seagal and Spanish judge Baltazar Garzon -- is expanding globally, including the opening of a new store in Harrods, England this summer.
It began in Colombia 17 years ago and set up in Mexico as crime figures took off again three years ago.
"The reality today is that someone from the private sector buys a garment more because he wants to be covered in case something happens than because he is already threatened," Di Carlo said.
Mexican sales increased from 25-30 percent in the past year and a half, with most clients from companies and government departments looking for traditional bulletproof vests.
But the shop display competes with any smart boutique in the neighborhood -- the clothes are just a little heavier. They range from women's waistcoasts with fur-lined hoods, to traditional Mexican shirts and Italian leather jackets with special panels to regulate body temperature.
They cost from 400 to 7,000 dollars, with three levels of protection, up to the force of an MP5 sub-machine gun.
Di Carlo said that they only sell to honest citizens, not to drug dealers, and vet clients against a US terrorist watch list.
Bulletproof clothes are only one part of security plans, used to complement armored cars, bodyguards and satellite communication equipment, in an industry that has seen annual sales increases in Mexico of 10-30 percent in recent years.
Some 50 companies produce armored vehicles from small cars to large trucks, costing from 25,000 to 90,000 dollars, said Esteban Hernandez, the Colombian vice president of Mexico's Association of Automobile Armorers.
Mexico is the third market in Latin America after Brazil and Colombia, and it will soon overtake Colombia where demand is waning as Mexican demand increases, Hernandez said.
Most of the thousands of security industry employees work in so-called "close protection," including bodyguards, security guards and drivers.
There are some some 10,000 private security firms across the country, according to Ricardo Leon, president of the National Council of Private Security Companies.
But only one fifth -- around 2,000 -- are officially registered: the authorities have banned 865 of them and 146 have been sanctioned for failing to meet legal requirements.
"There often aren't people who are competent enough within companies to seek private security contractors using a strict checklist," said David Crol, director of operations for Maori Mexico security company.
Corrupt and poorly-paid security guards, often recruited from the police or army, are sometimes even involved in the crimes they are supposed to prevent.
Private security companies last week called on the president to keep to election pledges to properly regulate their sector, after the government promised a string of other reforms to try to clamp down on organized crime and kidnappings.
Some wealthy Mexicans, including several hundred in the volatile northern border regions, have fled the country in response to the increasing violence this year.
Others, of the few who can afford it, rely on private security for reassurance.
"Organized crime is always ahead in security. You must never forget that," Crol warned.
Posted by Sam at 6:10 AM