No court for old men 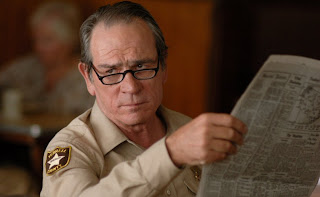 That's akin to messing with Texas.

Tommy Lee Jones sues Paramount
By Lomi Kriel - Express-News
Prize-winning actor and director Tommy Lee Jones is suing the makers of "No Country for Old Men," the 2007 West Texas crime thriller that garnered four Academy awards, claiming they have failed to pay him more than $10 million he is owed according to his contract.
Attorneys for the 61-year-old Jones, who portrayed the character of Sheriff Ed Tom Bell in the film based on the acclaimed Cormac McCarthy novel, filed the suit Thursday in Bexar County District Court against Paramount Pictures Corporation and its subsidiary, N.M. Classics, Inc., a Netherlands-based corporation.
"No County for Old Men" was a co-production between Paramount Pictures and Miramax Films, with Paramount handling much of the film’s release outside of the United States, according to the IMDB Web site.
Attorneys for Paramount did not immediately return calls on Friday.
Jones' attorneys referred questions to his publicist, Jennifer Allen, who said, "The paperwork stands for itself." Through Allen, Jones also declined to comment.
In the lawsuit, Jones claims he signed a contract with N.M. Classics on April 3, 2006, agreeing to act in the film, as well as to provide "additional related services" for the movie's promotion. In exchange, the lawsuit says the company promised to pay Jones a fixed "up-front" fee and, depending upon the film's financial success, "significant box-office bonuses and 'back-end' compensation."
Those pledged to be "significant," according to the lawsuit, because they were supposed to compensate for Jones' reduced up-front fee. "No Country for Old Men" later went on to win four Academy awards, including "Best Picture," two Golden Globe awards, and several other critical recognitions. It was a giant commercial success, making more than $160 million.
As part of his contract negotiations, Jones insisted he receive the same treatment as Scott Rudin, the movie's producer, and Joel and Ethan Coen, the directors, producers and screenplay writers, under all of the terms of the contract, including the percentage of box office bonuses he would receive.
But in the lawsuit, Jones argues that in December 2007 -- a month after the film's nationwide release -- Paramount representatives told him that the contract supposedly contained a "mistake," regarding "a major issue involving the deduction for home video expenses." According to the lawsuit, Jones claims company officials revealed they were aware of the supposed mistake before he signed the contract and acted in the movie and before it became a commercial success.
On January 10, the lawsuit says, company officials contended a second "mistake" had been made in the contract, regarding the formula in determining box-office bonuses.
Overall, the lawsuit contends, Jones has been deprived of more than $10 million. In the suit, Jones requests an auditor be appointed to review the company's books and records and determine how much he is actually owed.
Jones also argues the company breached his contract by failing to pay him the bonuses and wrongly deducting unauthorized expenses from his back-end pay. He says he was fraudulently made to render his services under a contract the company knew contained mistakes, though they didn't inform him of them until after the movie had been made, by which time it was too late.
Posted by Sam at 8:42 AM