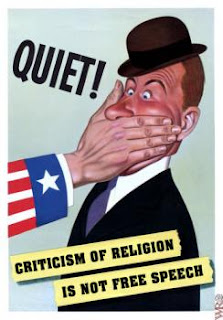 Ultra-Orthodox vigilantes spread fear in Jerusalem
breitbart.com
Shaking as she recalled her brutal beating at the hands of Jewish ultra-Orthodox vigilantes, a 28-year-old Jerusalem woman who would only identify herself as M. said she feared for her life.
Some residents say the self-styled "modesty squads" are spreading terror among those seen as straying from the strict moral code demanded of the ultra-Orthodox in the more conservative neighbourhoods of the Holy City.
There life revolves largely around the study of holy texts and a strict dress code that has men sporting black coats and wide-brimmed hats and women covering their heads, arms and legs.
Two weeks ago police arrested two alleged members of a modesty patrol accused of brutally beating M.
The gang allegedly gagged her, hit her, kicked her and said she would be killed if she did not move out of the ultra-Orthodox Maalot Dafna neighbourhood.
"They beat me up, tied me up and threatened to kill me," M. said, holding back her tears. "Who will prevent them from killing me?"
Neighbours had complained of what they called the divorcee's "indecent" lifestyle, which in such neighbourhoods can mean anything from wearing trousers to meeting men in private.
"I don't know why I was treated this way. What has my life got to do with those guys," said M., who until three years ago was married to a Haredi -- a word used to describe the most theologically conservative form of Judaism.
Police have also detained a man accused of torching a store in an ultra-Orthodox district that sold what some residents considered "immoral" clothing.
In Mea Shearim, a Haredi bastion where streets are sealed off for the Jewish day of rest and satellite dishes are considered a sign of heresy, an electronics store has become the latest target of the morality squads.
A young man, sporting the distinctive Haredi sidecurls, beard, black garb and hat, stood outside the store handing out pamphlets.
He said the store was threatening the morals of the community by selling MP4 players that would allow buyers to view indecent movies in their homes.
"This shop corrupts the neighbourhood youth," the man said. "We will fight until they stop selling these impure devices."
David, a salesman at the store, said he is an Orthodox Jew but believes that the protesters who have picketed outside for weeks "are spreading terror in the neighbourhood".
"They burned down our stocks, nothing will stop them," he said, declining to give his family name for fear of being singled out for attack.
In June, a 14-year-old Mea Sharim resident was taken to hospital with burns after an attacker hurled acid at her.
Israeli media said that at the time of the attack the girl had been wearing loose-fitting trousers and a short-sleeved shirt, enough to provoke the ire of religious fanatics.
In 2006, a 50-year-old American-Israeli woman was viciously attacked by four men because she refused to go to the back of a bus while on holiday in Jerusalem. The bus was not one of the sex-segregated lines Jerusalem runs to accommodate Haredi preferences.
In addition to violence within the Haredi community, Israel has also seen tensions between religious and secular Jews over the course of its 60-year history.
The ultra-Orthodox have led violent protests against swimming pools, cinemas and other establishments they consider immoral for failing to segregate the sexes or sacrilegious for opening on the Sabbath.
Meny Schwartz, who heads the religious Kol Haredi radio station, said the modesty patrols have been around for years, with the full approval of religious leaders, but appear to have become increasingly violent.
"For some weeks we've been seeing excesses," he said.
Posted by Sam at 6:04 AM