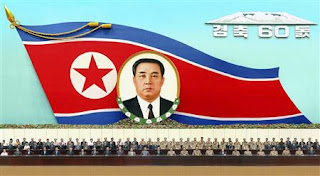 I guess Kim Jong-il was ill.

I did read that some believe he is dead, deaprted and outta here.

Good, maybe something good will happen, although I have my doubts.


TOKYO (Reuters) - North Korea's leader Kim Jong-il failed to appear at a parade on Tuesday to mark the 60th anniversary of the country's founding, Kyodo news agency said in a report from Pyongyang.
The event was being closely watched for any appearance by the reclusive leader following a report that he may be seriously ill.
Posted by Sam at 7:12 AM