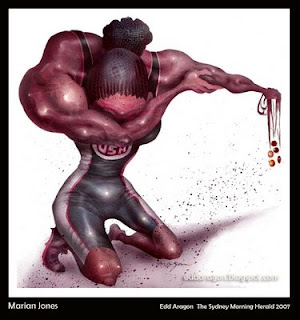 I wish her a speedy and complete recovery.

Jones leaves SA halfway house
Lomi Kriel -SAEN
Marion Jones, the disgraced former U.S. track star who was forced to return all five of her Olympic medals after she admitted to using performance-enhancing drugs, was released from a San Antonio halfway house Friday.
Jones, 32, had served all but two days of her six month prison sentence. Felicia Ponce, a spokeswoman for the Federal Bureau of Prisons, said Jones entered the prison system on March 7, 2008. She now will face two years of supervised release and 800 hours of community service.
Jones became one of the most famous female athletes in the world after winning three gold and two bronze medals at the 2000 Sydney Olympics. After frequent denials that she used performance-enhancing drugs, Jones in January was sentenced to prison for lying to federal agents about her use of the drugs and for her role in a check-fraud scam. She returned her medals and the International Olympic committee later wiped her results from their books.
The athlete was also one of many who testified in 2003 before a grand jury investigating the Bay Area Laboratory Co-Operative near San Francisco.
Posted by Sam at 8:58 AM