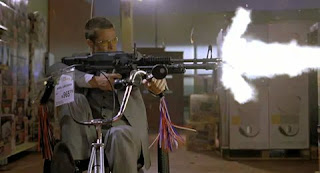 It sure gets tiresome don't it?

But it keeps me and others like me in business.

E. Side shooting leaves man wounded
By Michelle Mondo - Express-News
A man was recovering at the hospital Thursday after being shot in the chest allegedly by his girlfriend’s ex-boyfriend.
San Antonio Police Sgt. Mario Campos said the shooting occurred just after 6:30 p.m. when the man was driving away from his girlfriend’s house in the 1500 block of Gorman Street on the East Side.
Witnesses told police the woman’s ex-boyfriend rode a bicycle up to the car and started shooting into the vehicle.
The man shot was the only person in the car at the time.
Campos said he was struck once. The bullet entered his chest and exited near his shoulder blades. He was taken to Brooke Army Medical Center.
The wound did not appear to be life threatening, he said.
The girlfriend told police the two had been feuding for several months.
Posted by Sam at 7:24 AM