Good luck getting this trial underway and done 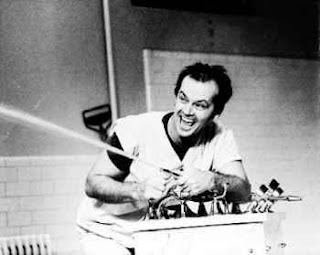 Boy, what a circus this must be.

I feel badly for the staff that has to take care of this guy.

Defendant's odd behavior delays murder trial again
Graeme Zielinski - Express-News
Another day, another delay in the murder trial of Richard Jett, accused in the 2006 stabbing death of 80-year-old Homer Lee Daniels, who was found in his East Side home.
This time, Jett, 50, somehow got hold of a marker, having stored it in “a body cavity,” a judge said, and colored black much of his face and his arms. Jett already was wearing a mask so he doesn't spit on people and was in orange jail clothes since it isn't clear whether he will again soil his civilian clothes, as he has done at least twice.
On Wednesday, appearing in court covered in the black ink, he engaged in his latest profane outburst, lunging at court-appointed lawyers John Kuntz and Albert Gutierrez, whom he had already threatened to kill, before he was quickly removed from the courtroom by alert bailiffs.
A clearly exasperated 379th District Judge Bert Richardson allowed that he believed Jett was “malingering,” though he kept the door open for a request by Jett's defense team that the 50-year-old with a history of mental illness be reviewed a second time to determine whether he was competent to stand trial.
“I don't believe that someone in their right mind would be acting the way he is,” said Kuntz, after the defense team had moved for a mistrial.
Richardson had ruled on Jett's competency last week but then grappled over the separate question of whether Jett, who was found with cuts to his hands days after the killing and was allegedly implicated by his then-girlfriend, could effectively mount his own defense.
Richardson ruled against it, and Jett acted up in court again with an outburst earlier this week.
Meanwhile, Richardson expressed concern over just how Jett got hold of the marker and ordered him cleaned up so that he could be present before the jury at least for the reading of the indictment against him.
The trial, presumably, resumes today with opening statements.
The trial's opening had been set for Monday, but the trial has experienced repeated delays because of Jett's behavior.
Richardson revealed an incident earlier in the week in which Jett was found in his cell, having covered himself in some kind of cleaning powder.
Posted by Sam at 7:40 AM